The Philippines Hydraulic Ram of AIDFI

In the Philippines (80 million inhabitants, of which 45% live on less than $ 2 a day), most people live in hilly areas, and the water is carried downhill on steep paths with jerry cans. Sometimes with the help of horses or water buffaloes, sometimes by the women themselves. Fetching the water takes a lot of time. Time that cannot be spent on more productive activities. Moreover, a minimal amount of water is fetched, which does not benefit hygiene.

Auke Idzenga, who has been working in the Philippines since 1980, founded the local organization AIDFI in the 1980s to look for solutions. After extensive research into hydraulic ram designs in the Philippines, he created his own design, adapted to local conditions, and designed for easy repair. Like all hydraulic ram pumps, the pump uses the energy of running water in a stream or river to pump a small fraction of the water up to 200 meters, and sometimes moves it up to a kilometer away, without using fuel or electricity. 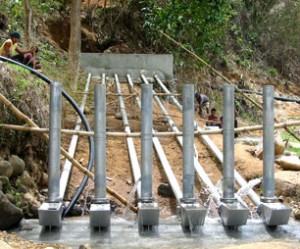 Idzenga: “This pump brings water to places that were previously thought impossible. The pump and all its parts are made locally, and people here know exactly how to service and make repairs to it. In the future, we would like to train more teams to produce the pumps and distribute the technology to other countries. ”Idzenga led the installation of 98 pumps in 68 villages over the last ten years, bringing clean water to more than 15,000 people altogether, and make irrigation possible for large areas of land. In 2007, he received the prestigious Ashden Award for his work from Al Gore, ex-vice president of the US.

“At first I didn’t believe it could work,” said Pedro Zayco Jr, the mayor of a local city. “How can you raise water higher than it was without energy? But you know, seeing is believing. ” Willy Granada, president of the Tara Small Farmers Cooperation said, “Look at all my tomatoes! They would never be here without that pump. And some people now have chickens and pigs. There are so many things you can do when you have water. ” 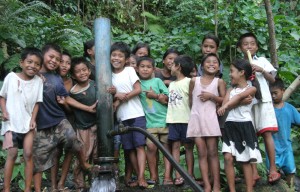 The pump has changed the life of Aracell Carbajosa, who lives in the village of Sitio Bagacay. “We used to get up at 4am to get water. Now the water is here, in the village, and we are very happy with it. When I was doing laundry down by the river, I always took food for the whole day. I also took the children, otherwise nobody would be home. Now they stay at home and so do I. ” The new water has brought many benefits, such as better hygiene and health of the children, water for irrigating fields and keeping small livestock. But above all it means a huge time saver for the women, time that can be used for example to take care of a vegetable garden, and for their children’s education.

An important objective ath the AIDFI is to transfer the technology to other countries, for which there is a lot of interest. Idzenga has already transferred the technology to Afghanistan, and Colombia and Nepal are planned.