During the last few months there were problems with the safety system of the Kijito windmill. The breakpin snapped much more frequently than usual. Last year the Diever had the same problem, then because of rising sand level in the well. Sand clogged the pump and caused frequent snapping of the breakpin, which was solved by dredging out the well. We assumed that for the Kijito the problem would now be the same and that dredging would solve our issues. This turned out not to be the case.

After removing the pump we noticed that the piston could get stuck in the higher range of its movement. This was a bit hard to spot, it is normal for the cups to sit quite tightly. In this case it was the support rings that got stuck; we noticed it because of some wear on the brass.

In 2017 the pump under the Kijito windmill had been removed for replacement of the cup leathers. Back the cylinder was quite stuck and we used a lot of force. This caused the cylinder to become very slightly oval shaped on the top. It is likely that this is what caused the piston to become stuck. Over time the brass of the cylinder was damaged and a small rim was formed.

Sanding down the rim proved quite difficult, but some efforts were made (professionally cylinders can be “honed” to make them perfectly round again). To be sure that the piston would not get stuck again, we used the lathe to shave a few millimeters off the cup support rings.

Our advice: when the safety on a windmill fails repeatedly, you will find yourself tempted to use a heavier breakpin. Always first inspect your pump. The safety is there for a reason. Should you see damage to the piston, expect damage to the cylinder as well. 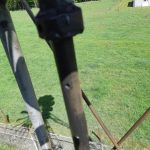 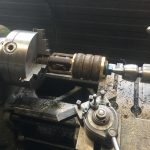 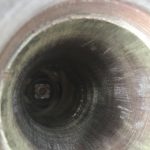 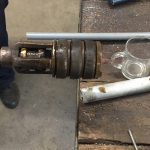